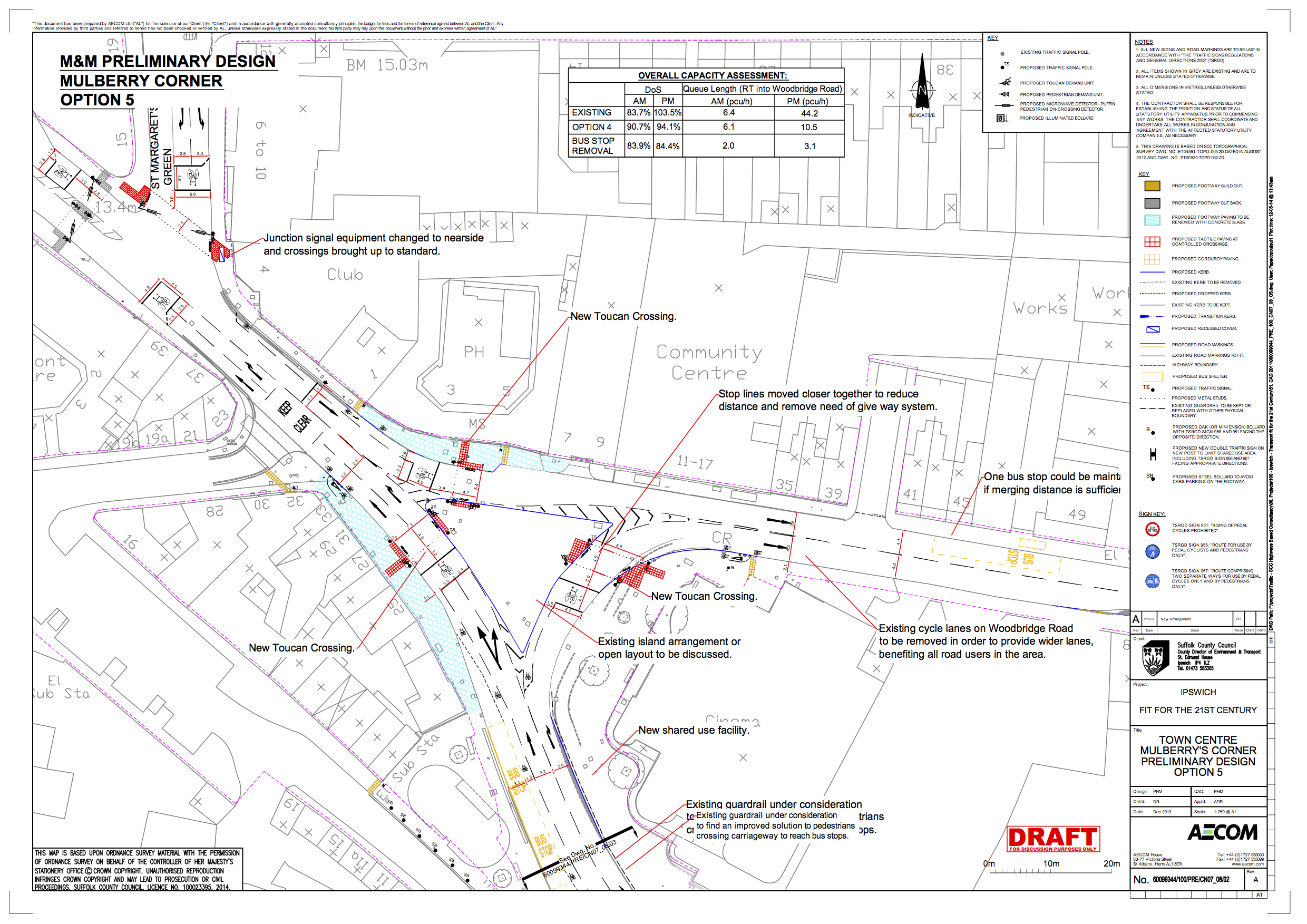 The following email was sent to Suffolk County Council/Travel Ipswich highlighting our concerns about proposed changes to the Majors and Mulberry Corner Junctions, which we believe makes the junctions more dangerous for cycling:

Dear Sirs
At the January meeting of Cycle Ipswich we reviewed in detail the proposed plans for the alterations to the Major’s and Mulberry Corner junctions (http://www.travelipswich.co.uk/assets/PDF/Mulberry-Corner.Dec-2013.pdf)

We understand that the Rev A drawings (April 2014) as published on the Travel Ipswich website represent the latest version.

Whilst these plans are not at consultation stage, we feel that we have a duty to communicate our concerns that elements of the proposed scheme will worsen the provision for cyclists in this area.

We are particularly concerned about the removal of the existing “give way” system where the link road from St Helen’s Street rejoins Woodbridge Road.

At present, the nearside cycle lane and give way markings enable cyclists to stop and wait for an appropriate gap in eastbound traffic approaching from their left.

The new scheme will require cyclists to continue in a moving stream of traffic onto Woodbridge Road (emerging in the right hand lane) and then filter into the left hand lane in order to make a left turn.

This will be a difficult and risky manoeuvre, particularly when traffic flows are complicated by the bus stop which is proposed to be retained. It will deter cyclists from using this route due to perceived risk and will create a serious risk of injury or death to cyclists.

In addition, the present layout gives the benefit of at least a non-mandatory cycle lane on the lower stretch of Woodbridge Road, which can be a busy and intimidating environment for cyclists. Whilst we would prefer to see properly segregated infrastructure, the cycle lane markings do at least give an indication to drivers that cycle traffic is to be expected and tend to increase the space given to cyclists by overtaking traffic.

We cannot understand the assertion that removing this lane is for the benefit of “all road users” and would ask Suffolk County Council / Travel Ipswich to confirm the evidence on which this is based.

For cyclists who do not wish to use the link road, the proposed alternative set out in the scheme involves leaving the carriageway and negotiating two Toucan crossings, which will make this option considerably less convenient and slower.

The initial Toucan Crossing (on the East side of the link road by the old Odeon) is also difficult and dangerous for cyclists as the acute angle at which it crosses the link road makes it difficult to monitor the traffic approaching from behind the cyclist as they approach the crossing. The scheme design does not appear to address this.

Given that cyclists would only use this route to proceed East the double road crossing is unnecessary. It would be much more convenient to continue the existing segregated route along the side of the Regent onto Woodbridge Road and then provide a single Toucan crossing at this point to allow cyclists and pedestrians to cross Woodbridge Road and access the existing cycle lane towards Christchurch Street.

In addition, we are concerned that the existing segregated cycle routes in this section are proposed to be replaced with “shared use” which will inevitably increase the risk of conflict between pedestrians and cyclists and uncertainty for both groups.

There is ample space in the area of this scheme to provide (or to maintain where it already exists) separate infrastructure for pedestrians and cyclists in accordance with recognised best practice. In addition there is a large area of planting in the triangular island in the centre of the Mulberry Corner junction which is effectively wasted space and could be utilised to allow a higher quality treatment.

We would urge Suffolk County Council and Travel Ipswich to reconsider this scheme and to consider other options which would be safe and convenient for cyclists as well as motorised vehicles. We would be happy to attend a meeting at the site to illustrate the issues, but we believe the key points are as follows:-

At present we believe the scheme is in direct conflict with Suffolk County Council’s newly issued Cycling Strategy.

In particular we believe it fails to “adopt best practices as described in the Manual for Streets 2” and also to “review new junction treatments for the benefit of cycling”. These are both stated objectives in the strategy.

In addition, the Strategy sets out a commitment to reallocate carriageway space to cycling where segregated infrastructure cannot be provided. Woodbridge Road is prime example of this, but this scheme actually envisages the reverse by removing cycle lanes without provision of any alternative infrastructure.

We note that the stated aim of these improvements is to reduce congestion in St Helen’s Street; however, we would suggest that this can only be achieved in the long term by reducing unnecessary car journeys and encouraging and enabling a shift to cycling and walking. Our view is that the scheme as proposed will have the opposite effect.

When this scheme was discussed with Travel Ipswich at the initial consultation stage we were informed that there was support for a move to a single lane from Mulberry Corner to the Argyll Street area (consistent with the road layout at the St Margaret’s Green area) with provision for segregated cycle infrastructure. This makes it doubly disappointing that the proposed scheme provides for an increase in lanes at the expense of even the minimal existing cycle lane provision.

Having considered the proposed design, we feel we need to put on record our view that the new treatment of the link road onto Woodbridge Road is unfit for cycling to the point that it constitutes a breach of Suffolk County Council’s duties under section 39.3(c) of the Road Traffic Act 1998 to take appropriate measures to reduce the risk to vulnerable road users when constructing new roads. We would also request sight of the Road Safety Audit and the CDM Designers Risk Assessment which have been carried out in relation to the scheme.

We would welcome an urgent response from Suffolk County Council and Travel Ipswich on these issues and an assurance that this scheme will not be implemented without appropriate alterations to make it fit for purpose for all road users.