Ipswich Borough Council are currently consulting on what should go into the Supplementary Planning Document (SPD). It is primarily about planning applications, and roads or footpaths as part of new housing schemes such as the Northern Fringe/Ipswich Garden Suburb.

This blog post is a collection of the main items we (Cycle Ipswich) would like to see included within the SPD.

There are 2 handbooks which were released around April 2014, which contain very good direction that should be referenced and used as inspiration.

First is the “Making Space for Cycling” document published by Cyclenation, and written by Cambridge Cycling Campaign. This document is better, it gives a higher level view, which is better for policy makers.

Second is the more detailed “Sustrans Handbook for cycle-friendly design”, which includes many dimensions and specifics, being more aimed at engineers. Of particular note is the diagram on page 6 highlighting which type of infrastructure to use depending on the speed and volume of traffic. 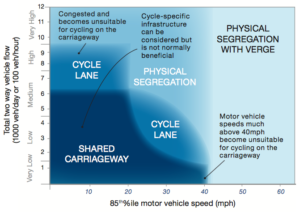 It is worth noting that there are several items which are not good practice in the Sustrans document, which David Hembrow clearly describes. These are particularly where the design of the infrastructure puts cyclists and motor vehicle drivers into conflict.

Various new items in Traffic Signs Regulations and General Directions 2015 (TSRGD 2015) improve things for cyclists should start making an appearance in Ipswich such as:

Cambridge Cycling Campaign have an excellent cycle parking guide, as do Cambridge City Council. Particular note should be given to the design of the stands, including the spacing, positioning, and access dimensions. Swept paths are also included to highlight the ideal widths and layouts required.

Conflict between cyclists, pedestrians and motor vehicles should be avoided at all times. The current significant use of legalised pavement cycling in Ipswich does not encourage large amounts of cycling. In some places there are 2 types of infrastructure, one for confident cyclists on the road, and another on the pavement for less confident cyclists. This should be changed so that there is one bit of infrastructure which ALL cyclists are happy to use. This will often mean that mobility scooters and similar vehicle users will use the cycle infrastructure too as it’s so good, and reduces conflict with other vehicle types.

Many of the key main routes into Ipswich don’t provide a lot of space for protected cycle infrastructure, so as an alternative some corridors should become key cycle routes with no through motor traffic, and only access to properties, whilst other corridors would be primarily for motor traffic. There would then be quiet links between the corridors too to encourage people to cycle round to those cycle route corridors.

Cyclists dismount signs should only be used in extreme circumstances. It is really rare that there is a valid use for them, or the cycle infrastructure is not good enough.

Ipswich Borough Council are currently consulting on the Cycling Supplementary Planning Document (SPD) looking for ideas of what should be included. They are also doing so for some other SPDs, such are parking standards in the IP-One area, and the low emissions strategy, which may also be of interest.

Please head to the Supplementary Planning Documents consultation page on the IBC website, and use the PDF to ensure you have included all of the info required in an email to planningandregeneration@ipswich.gov.uk. The submission needs to be completed by 11:45pm on Monday 17th August 2015.